A Broad Abroad: Snapshots from Kazakhstan 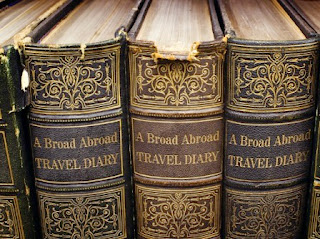 On the flight from Almaty, I fall asleep above a river winding across green terrain at the foot of snow-capped mountains. I awake to a brown expanse, striped alternatively light and dark. It looks like some parts are cultivated and others not. The patches are huge – much bigger than any fields in Europe. I am told they are mountains. There must be a translation problem—there are no such regular mountain formations anywhere on earth.
My host meets me at the airport and invites me to partake of the local delicacy—sheep’s head. I murmur my thanks and hope I don’t disgrace myself. 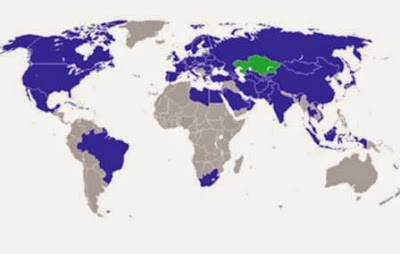 Dinner is most enjoyable, with not a sign of a sheep’s head. We put the world to rights over copious vodkas. He tells me Kazakhstan is the ninth largest country in the world and we try, unsuccessfully, to compile the list of the other eight. Driving back to the hotel, snow gently ripples across the road.  It may be spring in Almaty, but Pavlodar is more than 500 miles north.
Typically Soviet in some ways—same designs of buildings, same pale blue grills on the windows, same impetuous drivers—in other ways, Kazakhstan is softer. The people are more oriental, everything much gentler.
Next morning, we head off in brilliant sunshine, but when we stop to stretch our legs, I find the sun deceptive. There’s an icy wind blowing across the steppe.

The only words to describe the 200 miles drive from Pavlodar to Semipalatinsk are flat and straight.  As boring journeys go, it’s right up there with Moscow to Kostroma (5 hours of single track road through a pine forest) or the M11 between the M25 and the A14. We see miles of scrubland, the occasional frozen stream—and little else. In the middle of nowhere, it bends slightly to the left for no discernible reason. After a couple of miles, it straightens out. I fantasize on the campaign by locals to save the habitat of rare newts or other steppe creatures—but there is probably a more prosaic answer. 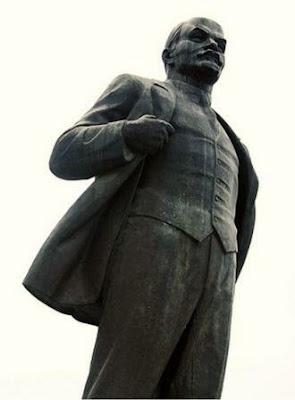 On my last evening in town, I walk in the twilight along the bank of the river. Late winter has given way to early summer, with barely a passing nod to spring. At nine thirty at night, it is warm enough for shirt sleeves.
I find a graveyard of statues—relics of a former age. Every second statue is Lenin—the remainder are faces I don’t recognise, although no doubt very familiar to Kazaks. The area is dominated by one statue of Lenin, so large it looks at first like a tall thin building. At least 100 foot high—from the sole of his boot to the bottom of his tailcoat is almost twice the height of a man. I find myself wondering how it got there—and where it was originally located. A fitting reminder that this country, large in itself, was just twenty years before also part of an empire stretching across half the globe.
[First published in Parcels in the Rain and Other Writing, 2013.]