I’ve been following with interest the blog tour about writing process, so was delighted to be asked by Cathie Hartigan if I’d like to follow her in answering four questions. If you missed Cathie’s fascinating answers, you can find them HERE.
Here are my answers:
What am I working on?
As usual, I have several projects on the go at once. I have a novel I’ve been writing since 2006; I’ve just finished yet another edit and it’s currently being read by members of my local Book Club. Once I have their feedback, I’ll decide on the next step: another rewrite; submit to agents and publishers; or publish it independently via my own imprint, Chudleigh Phoenix Publications. I am also putting together an ebook on Writing as a Business, based on the workshops I present each year at Swanwick, The Writers’ Summer School.
But my main project at the moment is to edit and polish the material I drafted during NaNoWriMo last November. The challenge is to write 50,000 words in 30 days, with quantity being more important than quality at that stage. This was my third attempt and my first success. I wrote a series of short stories, and when I reached 50,022 words with a couple of days to spare, I stopped — not quite mid-sentence, but certainly mid-story. I didn’t think about it again until this weekend, when I started editing. I had forgotten the details of what I’d written and was pleased to find a great variety of pieces I can work on for competition entries and submission to magazines. I was also shocked to see how much detail of my own life went into my fiction when I was just writing without thinking too deeply about it. There was one scene over the breakfast table that was eerily familiar. My aim is to find a home for all these stories before it’s time to start NaNo again on 1st November.
How does my work differ from others in the genre?
I really struggle with categorising my writing into a genre at all. I don’t write romantic fiction, although I’ve got more than one love story in my novel; I don’t write historical fiction, although two of the novels that are currently yelling for attention in my sub-conscious are set in the past, as is a major strand of my novel. I don’t write sci-fi or fantasy, although I read more of this genre than anything else. I don’t write about crime, although one of the stories I wrote in November… you get the idea. I tend to write ‘nice’ stories where the goody ends up on top and the baddy gets his just desserts, although anyone who has read The Well Brought-Up Woman in Life is Not a Bed of Roses will know it’s not always that simple. I guess it goes back to what I said earlier about writing my own experiences into my fiction. Many writers do that at some point; and since my life is unique to me, that’s how it’s going to differ from others. For example, there will usually be references to pharmaceuticals and/or Russia, two of my main influences.
Why do I write what I do?
I spent more than twenty years working all over the world, made some wonderful friends and had fascinating experiences. I turned from technical to creative writing in 2006 and originally tried my hand at life writing but quickly found I was much more comfortable writing fiction. Some of my early life-writing pieces finally saw the light of day in Parcels in the Rain but I still mostly write short stories — apart from the novel — and the non-fiction ebooks — and the blog posts. Actually, I guess I just write.
How does my writing process go?
I have a reputation for being well-organised. I’m usually the one who knows dates, times, exam rules etc. in my head. I’m the one my MA friends would email if they couldn’t find the handbook. In my former life, I was a project manager. So it won’t surprise anyone to hear I am a compulsive planner. 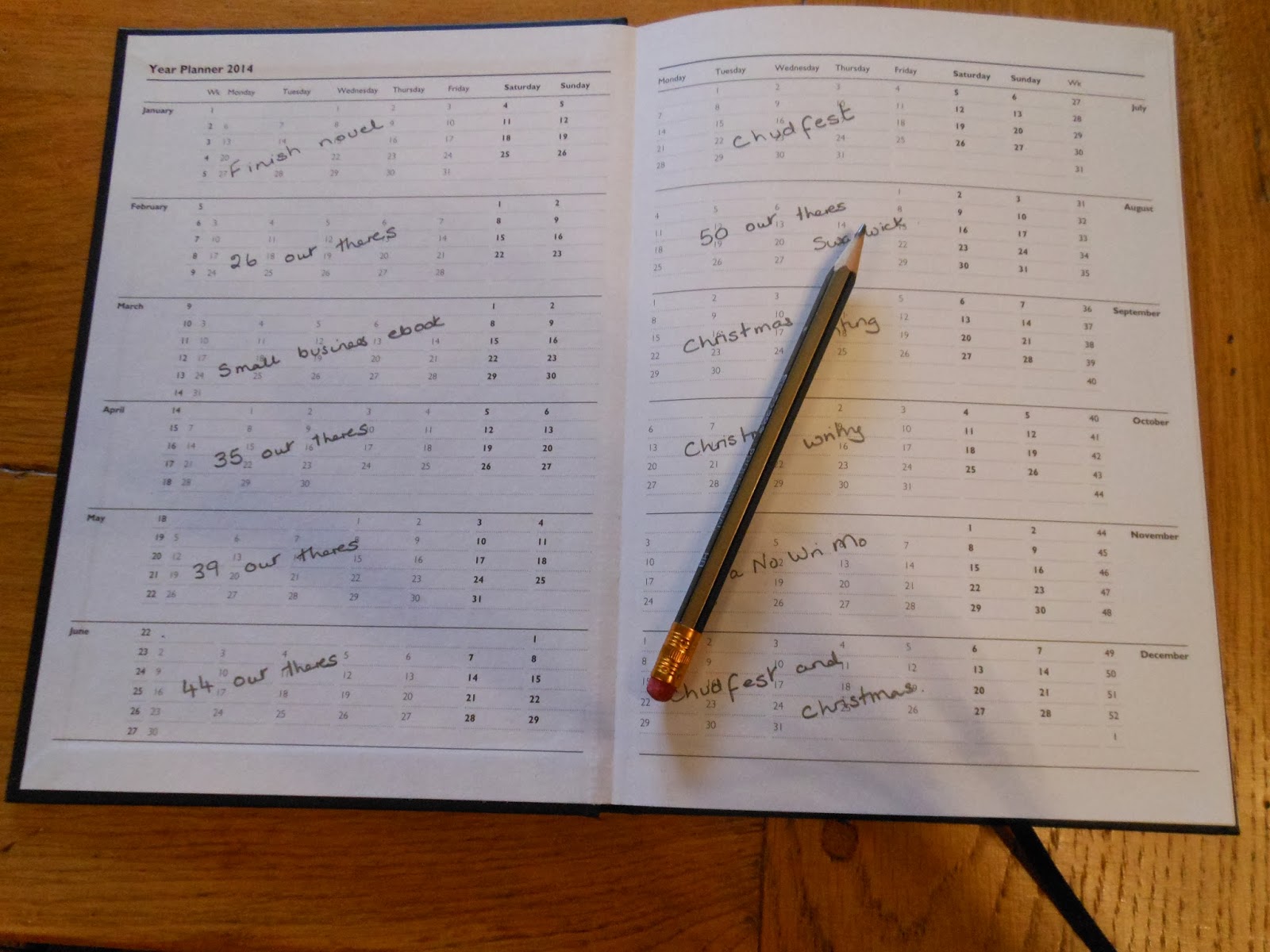 I have a set of annual writing objectives which I review and update in August (at Swanwick) and at the end of December. I have a monthly plan showing which project I am concentrating on. Every month I prepare a detailed To Do list and each day starts with Writing-4 hours, Writing-2 hours etc., depending on what other commitments I have. I’ve found from experience that if I plan to write every day and then can’t, I beat myself up about it — and this writing lark is supposed to be fun. So now I plan in advance NOT to write sometimes — and then I don’t feel guilty. I also have a detailed spreadsheet with all my pieces of work catalogued, records of when and where they’ve been submitted — and all the upcoming competitions I want to enter.
I generally write to triggers, either competition themes or self-imposed ones. I will usually plan my stories first, either on a flip-chart with post-its or on the cork board view in Scrivener. If I’m having trouble getting a piece written, I play the numbers game: 2000 words needed, that’s 10 scenes at 200 words or 4 scenes at 500 words and so on and start with a bullet point for each scene. It’s second nature to a former scientist to work like that, but it was a tip I picked up from Richard Beard on an Arvon Course some years ago.
Sometimes I try out the ‘pantster’ route by taking part in Write Invite or exercises at one of my Writing Groups (Chudleigh Writers’ Circle and Exeter Writers), but I’m not too good at that yet. I carry a notebook everywhere but rarely write by hand and tend to spend most days glued to a keyboard and screen.
I can write anywhere, so long as I have my iPod to shut out distractions, so have written on planes and trains, in libraries (not so quiet as one would expect these days), in hotels in remote parts of Russia, and in cafes. At home, I have a wonderful writing room in the garden with walls of melted chocolate and buttercup yellow. In summer, I open the doors, let in the sunshine, the smell of the herbs and the sounds from the farmyard across the stream. A little piece of Heaven in rural Devon. 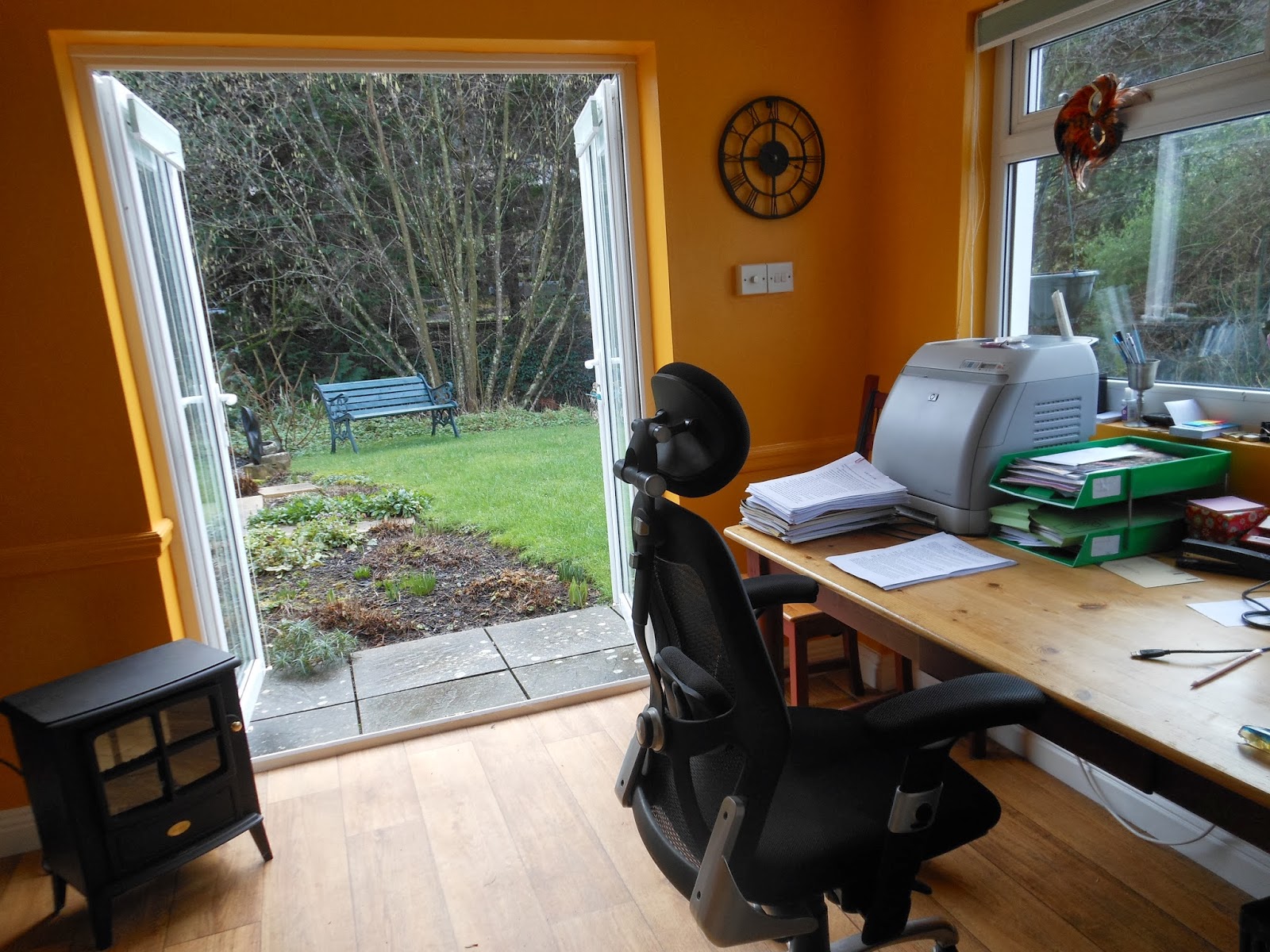 So that’s my writing process. I’m handing the baton on to friend and Swanwick buddy Madalyn Morgan. She’s up to her eyes in finishing her second novel at present; you can read about Madalyn’s writing process on Monday 17th February by going HERE.