What is it with writers and challenges? So many of us attempt different ones each year – and although I don’t have any data on the drop-out rate, if my own experience is anything to go by, I suspect it’s quite high.
Every November, hundreds of thousands of us take part in NaNoWriMo, a challenge to write 50,000 words in 30 days. The emphasis is on quantity, rather than quality – editing and polishing comes later – and in 2012, a combined total of more than 3 billion words was registered on the site. Many people then go on to complete and publish the novels they started this way. I have taken part twice so far: the first time, back in 2006, I managed around 6,000 words before real life got in the way.  Last year, I had another go and reached almost 20,000 words.
For the past two years, writer and columnist Sally Quilford has run the 100K challenge: write one thousand words per day for 100 days from 1st January. Her Facebook group contains 350+ members and there is a handy spreadsheet to allow you to monitor your progress (and compare it with other participants). I had a go both times: last year I lost count around 15,000; this year I more than doubled that, but still didn’t manage to finish.
The prolific writer Morgen Bailey posts daily short story exercises on one of her websites and the piece of new prose I’m posting today grew out of one of those exercises. I’ve recently downloaded Morgen’s handy ebook The 365-Day Writer’s Block Workbook   and will be dipping in to that whenever I am finding it difficult to get started.
Reading a recent posting by my Swanwick buddy, Vikki Thompson, I was introduced to yet another challenge: Chrys Fey’s 30 Day Writing Challenge contains a whole month of prompts to get our creative juices flowing.
I’d love to think that composers have the same sort of traditions: write a piece in C minor, starting with three quavers on G and a minim on E.
Or maybe somewhere, there’s an painter working to the following prompt: using only shades of brown, cream and grey, illustrate the phrase ‘is that a smile?’.
Maybe it’s because writing is such a solitary exercise and we like to think of lots of other people attempting the same task as us, at the same time. Maybe it’s nothing to do with being a writer; maybe it’s just that all humans, whatever their occupation,  need a goal to strive towards.
Whatever the reason, we keep challenging ourselves and, even when we fail, the word-count keeps going up.  So, this November, I will be having another go at NaNoWriMo and in January, I’ll be aiming for 100K again. And in the meantime, there’s this idea I’ve had for a writing challenge…
***
As I mentioned above, this piece grew out of a prompt from Morgen Bailey. Random: Fill in a word association word web, starting with the word ‘free’ then pick 5 of the words you created and write a piece including those words. This is the result: 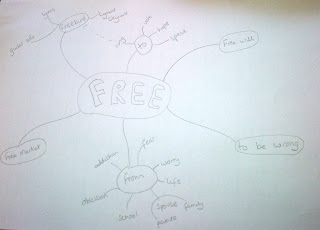 Free
Lynard Skynard was playing on the radio; Freebird, my favourite track of that year. I was playing along, practising my air guitar, when I looked up and saw him stroll into the café. His dark curly hair fell across his eyes; eyes so deep, they seemed almost black. His sun-darkened skin was the result of an outdoor job rather than lying around on the beach, I guessed. His blindingly white vest and frayed cut-off jeans framed him perfectly. I wanted him; I didn’t care whether he was alone or not; I was free to be wrong if I wanted to be — and this type of wrong felt so right. I didn’t consider his viewpoint; I forgot he had free will. I just wanted him and that was all there was to it.
Just then, Josie came out of the loo and stopped dead, staring at him too.
“Yes please,” she said – or words to that effect.
“What do you think this is – a free market?” I asked. “I saw him first, so back off.” Well, that was it — there was a real free-for-all.  She tried to push past me, I grabbed her arm. She took a swing at me, I pulled her hair. It took Big Dave and two of his mates to separate us.
By the time we’d calmed down and stopped glowering at each other, we realised he’d gone! I never did see him again — but I think of him every time I hear that song.
***
Question: What challenges do you set yourself – and why?