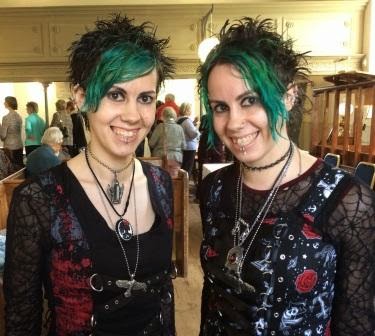 [I have two guests for the price of one this month. I first met these identical twins from Cardiff when they were shortlisted for the Exeter Novel Prize. Well, actually, I saw them across the room but was too shy to go and chat to them; they seemed so self-assured (and elegant – although they will probably hate me for saying that). If I’d only known how nervous they were… Then I heard them speak at the East Budleigh Literary Festival and they blew everyone away with their polished – and very funny – double act. This month, I am delighted to be chatting with C L Raven.]

What was your favourite subject at school — and which was the lesson you always wanted to avoid? Our favourite subjects were woodwork (or Craft, Design & Technology as it was called) and English, though we never did any creative writing in High School. In Primary School, we loved creative writing and we always used to decapitate and dismember people in stories. We’d draw these pictures with people’s body parts scattered artistically. Once, we had to write from the POV of children in Tudor times, so our characters went to watch executions, where people were decapitated and their heads rolled down hills (we now know this is unrealistic). Thankfully our writing has improved since then, though sadly, our drawing skills have not. It was clear we were either going to become writers or serial killers. Though if we were serial killers, we’d actually have a book deal. We’ve probably made the wrong decision.
We always wanted to avoid Maths. It brings us out in hives. We can actually feel our brains hurt when we try to work with numbers. There were many occasions when our Maths textbooks would be hurled across the room in rage. It still has that effect on us. Tax time sure is fun.
Talking about yourselves, how would you finish the sentence “not a lot of people know…”?
That when we were younger we wanted to be professional show jumpers. If only we were rich enough to have horses! We used to ride a lot and were actually pretty good, but not owning a horse was a barrier against turning professional. Nobody would be impressed to see us hurdling the jumps on imaginary horses like a Monty Python sketch.
Where is your favourite place on earth — and why? 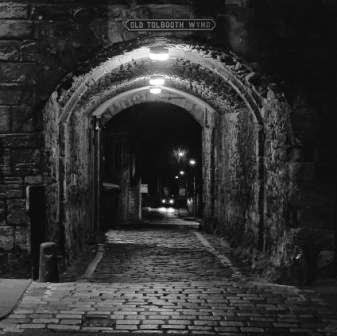 We’d like to say our local chip shop, but that looks like we’re scuppering the Government’s healthy eating campaign. Being home with our animal army is our favourite place, but we also love Edinburgh – it’s one city where you can still see the past co-existing with the present. It doesn’t take much to imagine Burke and Hare creeping through the wynds in search of victims. Is it bad to say that Burke and Hare were the reason we’d always wanted to visit Edinburgh? Most people go for the festivals, the architecture; we wanted to walk in the phantom footsteps of the resurrectionists. Though we managed to refrain from grave robbing while we were there. Customs confiscated our spades. However, we did spend a lot of time searching Greyfriars for bits of bone, despite being told it’s still a hanging offence.
How do you relax?
Relax? Is that a thing? We swim once a week and Zumba once a week, but they’re not really relaxing. We know the image of goths zumbaing is funny – especially when almost the entire class is in pink and we’re in the corner, in black, with skulls on our vests. We only went because our sister and mate wanted to join the class and we wanted to laugh at them. Turned out, we were very good at it. We also have regular board game nights with our friends. 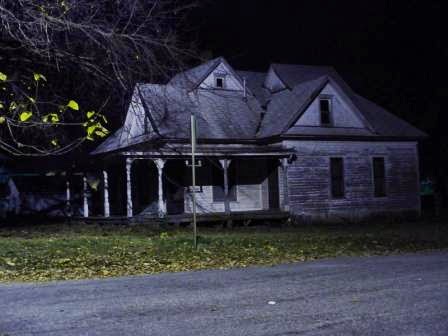 We also ghost hunt. Well, we try. Think ghosts must be scared of us because we never see them. We have a show on YouTube – Calamityville Horror. We even have t-shirts with the show’s name on, which proves it’s legit. We must be the only show where nothing paranormal happens. Basically it’s a series of disasters cleverly edited together to resemble a ghost hunting show. Can’t think why TV channels haven’t picked it up yet…
If you could change one thing about yourself or your life so far, what would it be?
We wish we had never been bullied all throughout high school. It ruined our lives and took us years to recover from it.
If you were a car, what type would you be — and why?
We’d like to say Jag E-Type – stylish, beautiful and sought-after. But in reality we’re more like our Renault 4s – quirky, distinctive, the only 2 in Cardiff and we break down a lot.
Now, which would you prefer to do: watch a film, go to the theatre, read a book or talk to friends?
We watch films, read and chat to friends weekly. We have chip and film night every Friday with our mum. It’s always a horror film. Going to the theatre is the only thing we don’t do regularly, so we’ll pick that one. Plus it makes us feel sophisticated and we don’t get to feel that way often. Though not sure going to watch Rocky Horror whilst dressed in fishnets, PVC hot-pants and glittery top hats really makes us sophisticated.
What would you have printed on the front of your T-shirt?
‘Avenge my foul and most unnatural murder.’ Then we could act surprised that people can read it and say “you can see us? We died ten years ago!”
Would you describe yourself as left-brain (analytical), right-brain (intuitive) or a mix of both?
Probably more right-brain. Our lack of logic and common sense is well documented and frustrates our mum no end.
OK, ladies, I set the earlier questions; now it’s your turn: Write the last question yourself and use it to tell us something about yourself, your life or your work.
Our question is: What would be your epitaph?
And the answer: ‘This is the story of C L Raven (they die in the end)’ We thought that was genius. Our family didn’t agree. We’ve told them we want a tomb, one of those massive crypts, with corridors lined with skeletal hand sconces, secret passageways, arches and gargoyles guarding the front. Apparently they won’t allow that in Thornhill Crematorium, so we have said we don’t mind it being in a field somewhere. So far, our mum & sister have refused, and the more elaborate our plans become, the more they say no. But if we put it in our will, they’ll have to build us a tomb or they won’t get our riches. We’ll make it a condition. Nobody ever makes conditions in their wills any more. Just once we’d like for someone to say we have to spend the night in a haunted house. 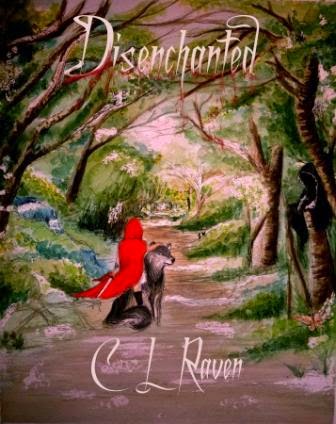 C L Raven have had several short stories published and also contribute articles to Haunted Digital Magazine. They have self-published five short story collections and one novel, which was shortlisted in the National Self-Publishing Awards. Their unpublished novel, Bleeding Empire was recently longlisted in the Exeter Novel Prize. When they’re not looking after their animal army, they’re exploring castles, ghost hunting in spooky locations and drinking more Red Bull than the recommended government guidelines. You can find their blog here and their Facebook fan page here.