I spent Saturday at the RSA South West conference in Taunton. The RSA (or the Royal Society for the Encouragement of Arts, Manufactures and Commerce to give it its full title) is a charity with the strapline of ‘21st Century Enlightenment’. On the website, it describes itself as: “committed to finding innovative practical solutions to today’s social challenges. Through its ideas, research and 27,000-strong Fellowship it seeks to understand and enhance human capability so we can close the gap between today’s reality and people’s hopes for a better world.” I’ve been a Fellow of the RSA for more than twenty years, have used ‘The House’ in John Adams Street as my London office to hold meetings with clients; dined in the elegant restaurant in the vaults; and listened to interesting lectures in the state rooms, including a memorable one by management guru, Charles Handy. And, like millions of others, I have marvelled at, been entertained by and educated by the Animate presentations, (developed by the RSA with Cognitive Media), particularly the brilliant discussion on Changing Education Paradigms from Sir Ken Robinson. If you’ve ever thought there was something wrong with how we educate our kids (and who hasn’t at some point?), then do take a look at this presentation next time you have a spare 10 minutes. 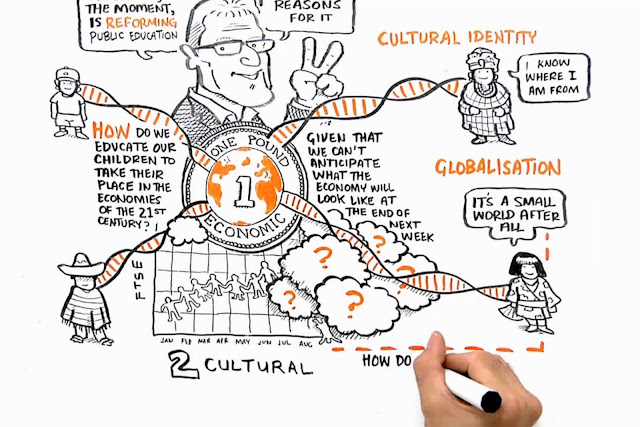 But until now, I haven’t managed to really get a handle on what the organisation does — or why I am involved in it. At the conference we met the new Chairman of the RSA, Vikki Heywood, who gave me exactly what I was hoping for. In addition to the strapline, I now have an elevator speech I can remember: enriching society with ideas and action. The RSA is the only organisation with which I’ve been involved which doesn’t really provide benefits for the members; it’s more a case of what the members can do for others. And yes, I know there are lots of other organisations which have the same focus, from Rotary and Round Table to the Mothers’ Union, but this is the only one to which I have belonged. So it’s nice to finally understand what it’s all about.
***
One RSA project which is dear to my heart as a former production manager is The Great Recovery. The idea is to work with designers and manufacturers to develop products which at the end of their life-cycle can either be repaired (remember when we used to repair things that broke, rather than throwing them away?) or recycled. Someone described it as ‘Cradle to Cradle’ approach to manufacturing, rather than ‘Cradle to Grave’. In a week where we have just bought a new printer and discovered a full set of replacement ink cartridges is more or less the same price as a new printer (complete with cartridges), this is music to my ears.
***
One of the perennial problems for any organisation of people from disparate locations is how to communicate effectively. Our region covers the three counties of Cornwall, Devon and Somerset and we only get together physically once or twice a year. Someone suggested we might use Twitter to hold regular discussions or get-togethers. Putting aside the fact that many of the people in the room are not Tweeps and have no wish to be, this raised the question in my mind, and not for the first time, what is Twitter for? Do we use it effectively? And is it really an appropriate medium for bringing large groups of people together? 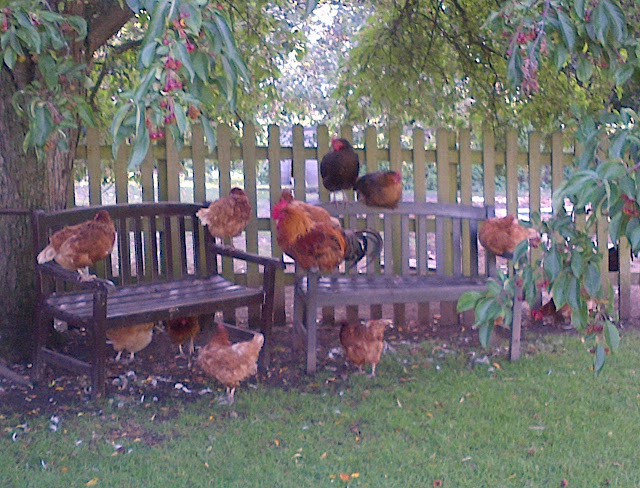 (Yes, I know hens don’t go tweet, but these were the only birds I could get close to all weekend!)
At the Winchester Conference forWriters in June, Eden Sharpe from Independent Author Resources described Twitter as a cocktail party for the world, at which one could listen in on all sorts of conversations, and, if invited, even join in on some of them. At the Swanwick Writers’ Summer School in August, someone described it as being in a large dining room with a huge buzz of many conversations going on, some of which you could plug into, but most of which you missed. It’s certainly a crowded arena with lots going on, most of which gets missed and is so transitory, it doesn’t matter.
There is a growing body of work on Twitter etiquette. Molly Greene publishes some wonderful articles on the subject. A recent posting on ‘10 tweets you should never send’ was so popular that it has garnered more 100 comments to date, is still receiving feedback several weeks later – and some of her readers, myself included, have taken to Tweeting a link to the article to anyone who spams us with those awful automatic direct messages: thanks for following me; now ‘like’ my Facebook page/link with me on LinkedIn/buy my book.
Writers who are building their ‘platforms’ are told they need to be on Twitter to market their books. Jonathan Gunson writes great articles on effective marketing via Twitter. I’m a relative novice when it comes to Twitter, so whether I can make it work as a marketing tool remains to be seen.
I occasionally take part in ‘Devon Hour’ a manic scramble to chat to, follow and retweet local businesses, which takes place at 8pm on Wednesday evenings. It’s great fun and I have made some useful connections, especially with the local press; but I don’t kid myself that I have developed a real relationship with any of the other businesses to whom I’m ‘talking’. To do that, I believe one needs to be in the same room; to look into someone’s eyes; to be able, sometimes, to read what they are thinking behind the words they are saying. That’s not possible from one keyboard to another and certainly not possible in 140 characters!
So, do you use Twitter and, if so, what do you think of its effectiveness as a method of communication?