Houston, We Have A Problem…

The cultural – as opposed to socialising – part of the trip begins today. I rise early and pack carefully, checking all the travel arrangements and documents. I have always been the organised (or bossy, depending on your viewpoint) one who looks after that sort of thing, There was this incident, you see, in Edinburgh where Michael temporarily mislaid our return train tickets – and even though it was forty years ago, I’ve never really forgiven him… but that’s another story.

The first bus, from Fuengirola to Malaga is late, crowded and dirty. All the empty spaces are in rows behind sleeping passengers in reclining seats. It is not a promising start – but in less than an hour, we have transferred to the Granada coach, which is clean, comfortable and with pre-allocated, numbered seats. We settle back for the 120km drive north-westwards. I am troubled by a faint concern that everything is going too well, but I ignore it. In Granada we successfully negotiate the Spanish-speaking self-service machine and purchase our return tickets for the end of the week. We find a taxi driver who takes us swiftly and cheaply through the outskirts of the city and the gardens of the Alhambra to the front gate of the Convent del San Francisco, which is now converted into a Parador. 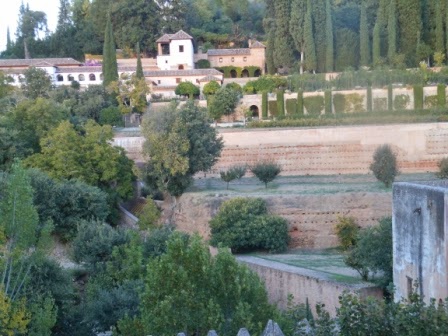 Our room is cool and beautifully decorated, with a window out onto the gardens. We retire to the coffee shop on the terrace for a late lunch, marvelling in the fact that once the palaces close for the night and the tourists depart, we will have much of this wonderful location to ourselves. Refreshed, we book a table in the restaurant for 9.30pm (almost late enough for the locals!) and return to our room where I start unpacking. 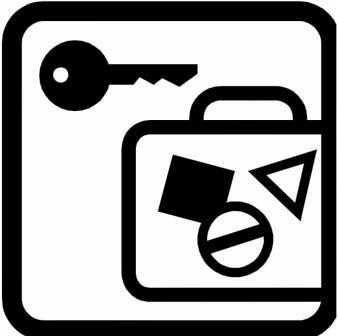 And that’s when the feeling of unease slams back into me. My suitcase is closed with zips and a coded padlock – I am soon able to reclaim all my clothes. Michael’s case however is locked with a key – a key that is currently sitting, along with my house keys, in our friends’ spare room in Mijas. I briefly consider trying to smash my way into a metal suitcase that has withstood the test of time and numerous baggage handlers – while Michael sits in his shorts and t-shirt, staring at me in disbelief. A very short, but somewhat sharp exchange of views later, we cancel our dinner reservation (without even bothering to check if there is a ‘no shorts’ dress code) and dispatch a taxi driver, with a fistful of euros, on a mercy dash.
Four hours later, we are in possession of the keys once more and my poor husband is reunited with his trousers. He looks a little less pained, if still somewhat shell-shocked. I promise him I will never again mention a certain incident in Scotland – and will let him look after the keys, and travel documents, in future!