[For more than twenty years, I had the privilege of working in many countries around the world. These experiences influence my writing and my stories are often set outside the UK. I thought it was about time I introduced some travel writing to this blog. And it seemed appropriate to start with Ukraine.]
The crowd surges towards the small gap between the buildings.  Bodies are forced together, air sucked out.  I am pulled along, as though caught in a river, swollen by the rain.  An old man calls for his wife, struggling to keep his feet.  Children look for parents.  Friends cling together.  A couple hold a pushchair at shoulder height, their baby screaming in panic.
August 2001, Kiev.  Independence Day celebrations started early with the military march-past. From our vantage point high on a side street, we were too far away to recognise faces, but there was no mistaking the roar of the crowd when the President drove by with his buddy from Moscow.  But, the fly-past of Antonov aircraft was more impressive.  As the massive transport planes appeared over the buildings, the sun dimmed and speech was impossible above the throb of engines.  They seemed within touching distance.
Once the formalities were over, everyone spilled into the road to promenade.  Stages along Khreshchatik presented traditional dancing, mini-dramas, rock music.  Balloon sellers jostled for space with buskers.  A young violinist entranced us with Tchaikovsky and Borodin.  As she switched to a well-loved folk tune, old men clapped in time to the beat and youngsters twirled around her.  People dropped a few kopeks into her hat before moving on.  Every few yards, there were marquees where hot, tired spectators could quench their thirst. 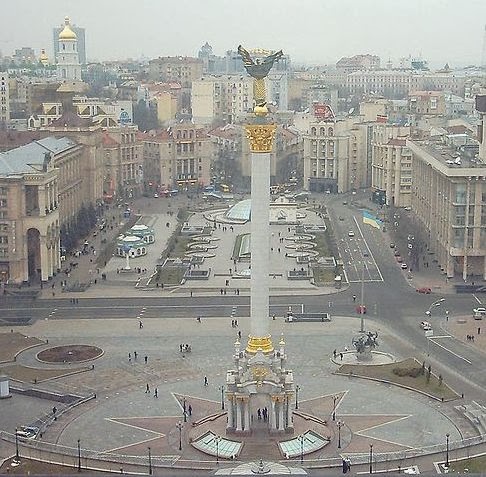 As darkness fell, I joined the people migrating towards Independence Square for the grand finale.  For exactly fifteen minutes, the sky was alive with rainbows of colour, starbursts of brilliance and gardens of fire.  The display was magnificent, even by the standards of a city that loves such spectacles and will mark the closing of a disco on a Sunday night with a short, but very noisy, burst of pyrotechnics.   Now it is over.  Everyone turns for home at the same time.
The Square is filled with monuments, fountains and glass domes of an underground shopping centre.  Small roads lead off to surrounding areas, but the main route is back into Khreshchatik.  Imposing, pre-Soviet buildings line the square.  Exquisite friezes, like stone lace, bridge the gap between nineteenth and twenty-first centuries.
The normally wide pavements are narrowed by drinks marquees and confectionary stalls.  It would be tight for three people walking abreast.  Now there are hundreds trying to occupy the same space.
I am swept along by the momentum, pushed from behind by people who cannot see what is happening.  Strangers clutch at one another for support; there is no time for reticence or discretion.  The air smells of sweat, beer and unmistakable fear.
I struggle to stay upright in the crush.  The edge of the road is lined with benches, used to watch the morning’s parades. They look reassuringly safe, like rocks rising out of the swell.  They are already full of people but I spy a small gap.  As the flow takes me close, I fling out an arm and a woman hauls me onto the bench beside her.
But the impression of safety is an illusion.  Above the crowd, I am still held in its grip.  On the ground, it was easier to brace yourself if someone stumbles.  Up here, with just a couple of inches of wood to balance on, if one goes, we all go.
Looking over my shoulder, I see the roadway, still full of people, but not dangerously so.  I twist around, using shoulders and backs to steady myself. Stepping across other benches and forcing my way between the last bodies, I reach relative tranquillity.  The raging torrent is a stream.  Groups of people part to avoid me and flow together when they pass.
***
Kiev will always remain in my mind a city of laughter and celebration; where danger lurks below the surface, but passes as quickly as it comes. This week, as I watch pictures on TV of the violence in the city that was briefly my second home, I remember that day of celebrations and hope my friends will soon find good reasons for firework displays once more.