No More Guilt Over Dickens

Like many other bibliophiles, I own a full set of Dickens novels. You know the ones: green leather, gold lettering, pale yellow ribbon bookmark, thin paper and tiny print [although the last one might be more to do with age than the publisher].

I bought the set many years ago, one volume per month, in an imitation of the manner in which Dickens fed his words to an appreciative world. I can’t remember how much I paid for them, and that’s probably just as well. 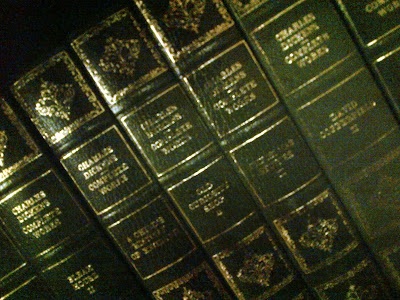 At the time, I opened one or two of them, even tried to read a chapter or two, but that was it. And they have sat on the bookshelf ever since, staring accusingly at me. I read the abridged versions we were given at school. I’ve watched every TV adaptation for the past fifty years. I can quote famous lines from one or two of the novels. I’ve even seen Oliver! at the London Palladium. But, I have to admit it: I have never read Charles Dickens as an adult reader. And it’s always been a source of guilt for me.

A couple of months back, our local book group was choosing our future reading matter. Someone suggested we go for one of the classics. I admitted my Dickens-less state; and that was it: Little Dorrit became our October book of the month.

I was somewhat dismayed on taking it from the shelf to find I was holding Volume I and that the whole work was just short of 1000 pages long. Dickens published it in monthly parts between December 1855 and June 1857. Maybe trying to read it in four weeks was a mistake.

I tried; I really tried to enjoy it. After the first couple of chapters, I gave in to age and downloaded the electronic version on my Kindle, which made the reading easier on my eyes, but it didn’t make it any easier on my brain.  I kept going to the very last page, although that took more than six weeks and I hadn’t got to the most dramatic chapters by the time our book club met. I loved some parts: the Circumlocution Office rang so many bells, even today, and I would recommend chapter 10 to anyone who thinks the bureaucracy of today’s government is anything new. The characterisation was as wonderful as I knew it would be: I loved Mr Pancks and Flora; hated Mr Dorrit more than the obvious villains; and wanted to give Little Dorrit a good shake on more than one occasion. But I struggled with the detailed descriptions and with the archaic language; with the fact that nothing happened sometimes for whole chapters at a time. As someone said during our book group discussion: the ending was a real page-turner, but it took a long time to get there.

I do not for one moment dispute that Charles Dickens is one of the greatest writers this country, or indeed this world, has ever seen. But I have decided he’s not for me; not in the written form anyway. I will continue to watch or listen to adaptations and marvel at his story-telling abilities. There are another thirty-four volumes on my bookshelf; and I will probably not read any of them. There are just so many other good books out there which I want to read, both classics and modern publications. The book group’s going to tackle War and Peace next summer, but in the meantime, I’ve moving forward a century or so.
Does anyone want to buy a set of Charles Dickens novels, barely used?