Rushing to the Ball Part 3

[Last week we saw my take on the old fable The Tortoise and the Hare. from the point of view of Harold Racer. This week’s snippet of new prose is the same story, told through the eyes of Tommie, his brother. 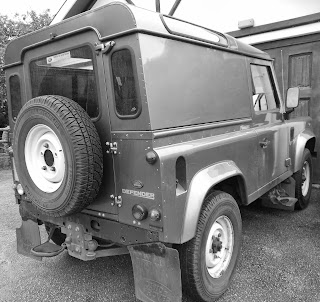 I wasn’t looking forward to the Summer Ball. Harold had persuaded me to go, in fact he’d paid for the ticket so I couldn’t really complain, but I knew what would happen – it had happened before, We’d go there together, sit together for the meal – and then he’d get off with someone and I’d be no more use to him.
“You OK to get home on your own?” he’d said to me last year as he’d shepherded the Carnival Queen out towards the car park. I’d ended up walking the six miles home – and that’s no fun in a DJ and new shoes.
This year, I was going under my own steam. The Land Rover’s not too smart, but at least I’d have my own set of wheels.
I left home ten minutes after Harold – he’d been in a rush as usual. It had been raining all day, well, all year really, and the lanes were quite treacherous. As I got to the bottom of the hill, I slowed down. I knew it had been flooded there before. And that’s when I saw him. Oh dear, I know it’s not really funny – but he looked so forlorn standing up to his knees in water. I’d have stopped, but he’d already called the AA. As I drove past, I had a sudden thought; this year’s Carnival Queen was even fitter than last year’s.