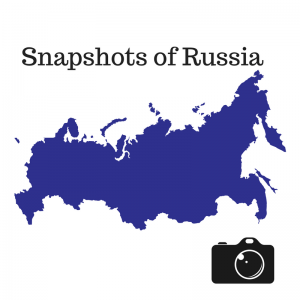 Between 1989 and 2012, I worked in the international pharmaceutical industry (yes, the sometimes murky world in which my thrillers are set). During that time, I travelled all over the world, but gradually more and more of my time was spent in Russia and the Former Soviet Union countries. I met wonderful people, visited incredible places and built a fantastic collection of memories. This occasional series is designed to share some of those memories. Previously, we have visited Moscow and St Petersburg. This time we are heading to Kostroma Oblast in the north western corner or Russia. 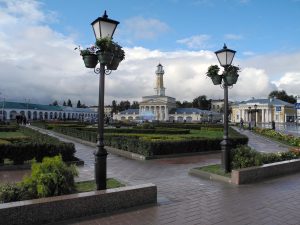 Kostroma was the first Russian city I worked in. It is reached via a five hour journey northwards from Moscow; and coming after a four hour flight from London, was always done in the dark. Most of the drive takes place on a single track road stretching into the distance through forests of pine trees and silver birch. There is a brief change of view at around hour four when we reach the chemical works at Yaroslavl. Huge metal structures and tongues of flame shooting into the night sky present a scene out of Mordor. But then the road turns abruptly eastwards and we are back into the trees for another hour before reaching our destination. Like many of the places in Russia, Kostroma has plenty of room to spread out, with elegant buildings  and massive statues set in parks and gardens.

My first visit, as a nervous young project manager, was memorable for a number of reasons. I met the man who became the inspiration for Gorgito Tabatadze; he would be one of my longest-standing clients until his untimely death some fifteen years later. I’m just going to call him KD. We ate our first meal in a hotel bedroom. It was 1993 and after a very hard winter, there was very little food around and restaurant menus were largely works of fiction. But that same evening, we held our first meeting in the local casino, which told me that although there was not a lot of food to go round, not everyone was poor and hungry. I also threw out of the window my resolution not to take off my clothes for the company, when I agreed to visit the sauna after work one evening. 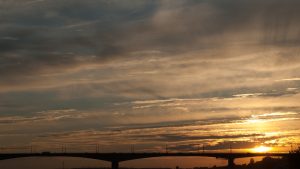 Our project was located in a former missile base some 40km outside of the city. But it is Kostroma itself that sticks in my memory. One of the administrative centres of Russia, it is home to more than 250,000 inhabitants, making it similar in size to Newcastle or Sunderland. It’s located on the confluence of the Rivers Volga and Kostroma, and the city is entered via a massive stone bridge. Built in the twelfth or early thirteenth century, it has associations with Prince Vasily the Drunkard; with Ivan I of Moscow; and with Boris Gudunov. 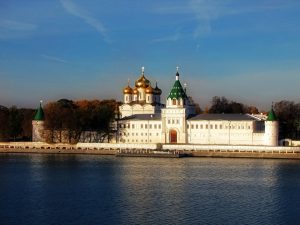 But Kostroma is best known for its association with the Romanovs. In 1612, Mikhail Romanov was living in the Ipatiev Monastery when an embassy arrived from Moscow and a dynasty was born that would rule Russia for the next three hundred years. The monastery is still largely intact and visible from the city, sitting alone on the opposite bank of the river.

I visited Kostroma several times in the early 1990s as I helped establish a tablet factory in that former missile base. On the day the plant was opened, all my team and I were presented by the Mayor with certificates bearing the city’s coat of arms and a Russian inscription. No-one translated the inscription for us, but I like to think it grants me the right to drive my sheep over the Kostroma bridge.

I returned ten years later to give one final training session to the staff of the tablet factory. At the end of the week’s course, KD gave me a delicate gold wrist watch to remind me of my visit and my friends in Kostroma. I still wear that watch, but I don’t really need a physical object to bring back memories of that old city. They are there as soon as I start to think about snow, Russian churches, hot summers, mosquitoes or endless dinners featuring lots of vodka and dancing. Happy days.

Russia is the location for my current work in progress, Corruption! which will be published in September 2018. But it is also the setting for my prize-winning novel Gorgito’s Ice Rink and the fictional town of Nikolevsky is based on Kostroma. A tale of love, loss and broken promises, it tells the story of one man through the eyes of the people whose lives he touched. You can download your copy now by clicking here.