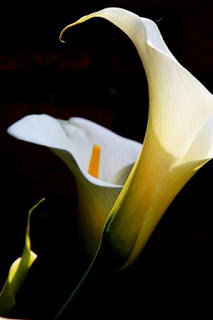 One of the most special moments each year takes place during the 12.20 pm service on Sunday, day 2. That’s when the Book of Remembrance is opened and we hear the names of members of the school who have passed away in the last twelve months. This year, we remember: Ursula Kennedy, Pat Lowe, Hugh C Rae, and Catherine King. The list is shorter this year than last, but no less poignant for that. It’s always sad to lose a friend.

The Daily Interview
My interviewee today is the person who, despite his assertion that “everyone else does all the work”,  has ‘the buck stops here’ stenciled on his forehead this week. 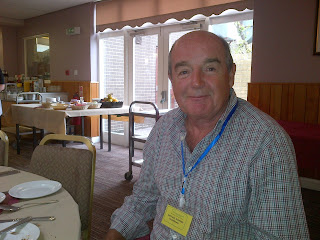 Swanwick Chairman, Michael O’Byrne writes both fiction and non-fiction. He is the author of four crime novels, two of which he has self-published. His current novel deals with the contemporary topics of child sex exploitation and police corruption. His non-fiction books are based on his 35 years experience as a police officer in the Royal Hong Kong Police, The Met, Surrey, Thames Valley and Bedfordshire. I caught up with Michael over breakfast in The Hayes this morning.
Michael, what brought you to Swanwick and when was that?
“I was first encouraged to come to Swanwick in 2006 by the late Chris Robinson, who had been coming to the Writers’ Summer School for about 20 years. I didn’t think it sounded like my sort of thing at all; but I was wrong. I loved it and have been coming back ever since.”
What is the best thing that’s happened to you in Swanwick?
“Without a doubt, it was the invitation to present workshops on crime writing a few years back, because on the back of that, I wrote The Crime Writers’ Guide to Police Practice and Procedure.”
And what is the strangest thing that’s happened to you at Swanwick?
“I can honestly say that I’ve never had anything other than pleasant experiences at Swanwick. Everything’s been fine.”
But I wasn’t going to let Michael get away with that, so I reminded him of the evening last year when he sat on the stage in the Main Hall in his dinner jacket and chaired Swanwick’s version of the radio show I’m Sorry I Haven’t a Clue and he had to agree that the moment when the whole audience attempted to play the kazoo was pretty strange; funny, in tune (well, according to Michael, anyway), but definitely strange!

You can read more about Michael and his books on his website.

Well, the day’s not nearly over; it’s not even dinner time yet. Then there’s a guest speaker, a quiz and the first disco to go to before bedtime; so another busy evening coming up. See you all tomorrow.