This posting should have been a detailed account of how hard we’re all working and all the writerly activities we are getting up to. As the title suggests, I may well fail in that objective.

Joyce Ward set the tone for her Chairman’s Welcome when she informed us that the numbers are up this year; there are 3.5 women for every man; and there are 55 white badgers (or Swanwick virgins), of whom 7 are Top Writers. She didn’t tell us what this influx of youngsters has done to the average age of attendees – we were left to work that one out for ourselves. We learned that Xanthe and Peter are co-habiting in a cupboard; we whooped like an audience at The Good Old Days when the raffle prizes were announced; then applauded the winners of the annual competitions. Swanwick 2012 was thoroughly launched.
My journey to Swanwick had been less than wonderful. Stuck at the opposite end of a jam-packed train from the refreshment trolley, I was one of the few people in the carriage who didn’t come prepared with bags of sandwiches, crisps and cans of drink. I almost resorted to the emergency chocolate buttons but remembered just in time that after a week of three meals a day at the Hayes, I would look back on a missed lunch as appropriate preparation.

Arriving at Derby with more than an hour before the coach was due to leave, I expected to find myself a quiet corner of the cafe and get on with my book. What I actually found was a noisy gathering of Swanwickers that gradually swelled to a crowd as more trains arrived. We immediately fell into the usual “what are you writing” and “what courses are you going to attend —or give” conversations. Within minutes, I was answering questions relating to my own topic (writing as a business) and noting recommendations for more reading around my dissertation subject. The rest of the afternoon flew by with visits to the book room, chats with old friends, plus the aforementioned Chairman’s Welcome and soon we were queuing for supper — oh, how I’ve missed my annual meal-time queues!
I can report that food portions are as generous as ever and the custard is even brighter yellow than I remember it.  Only one thing marred the evening – the news that the chocolate man won’t be with us on Wednesday. How will I be able to return home without the usual ‘I Love You’ heart?
All of which brings me to the intelligent silliness (his agent’s description) of Steve Hartley, who was the guest speaker. Not having any children or grandchildren, I have to confess I’ve never read any of the Danny Baker Record Breaker series —but I may well have to fix that, after hearing Steve talk about the fifteen years it took him to get published and the lessons he learned along the way. His stories about brown penguins, armpit orchestras and being banned from one primary school were memorable. His five rules for getting published are well thought through and each one was illustrated with cautionary tales. [I was particularly struck by rule four: get lucky] Steve told us he was only allowed to speak if he agreed to bring one of his props with him. No, it wasn’t The World’s Biggest Bogey. It was Thelma’s pink spotted pants and therefore, I think it is only fitting that I close this account of day 1 at Swanwick with the picture of 11 writers breaking the record for the greatest number of people in one pair of pants. 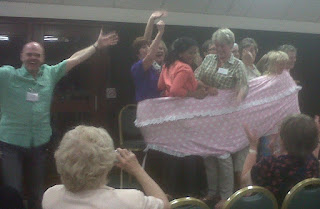