Well, we’ve not got to the stage of fisticuffs yet, but we’ve virtually had a real fight in the world of Swanwick (do you see what I’ve done there?). I’ve been coming here since 2007 and even in that relatively short period of time (in Swanwick terms) things have changed a lot.
In my first year, everyone used paper and pens to take copious notes of all the speakers’ pearls of wisdom. Today, we had almost as many keyboards in use as writing implements – and in fact many of us are taking fewer notes as everything will be available online after the week is over.
But it’s not so much the issue of paper versus electronic notebooks that is causing (sometimes heated) debate, so much as the question of social media: Facebook, Twitter – even blogs. It is a topic which seems to polarise opinions. There are many who believe absolutely that having an online presence (or a ‘platform’ in the marketing jargon) is essential, especially for those of us who are ‘independently published’. On the other hand, there are still a lot of people who refuse categorically to ‘get involved in any of that stuff’. And although there are obviously some generational influences on this, it’s not completely youngsters versus oldies (as I hope I am demonstrating right here). I believe it’s more a case of fear of the unknown versus willingness to have a go.
In today’s session on ‘Promoting Your Work’, our workshop leader, the wonderful Marion Hough, told us she didn’t ‘do social media’ and had no interest in it. By the end of the session, after talking about some of the benefits that can be gained, I think we may have persuaded her to change her mind or at least consider it. It will be interesting to see how many people turn up for Fiona’s Twitter 101 tomorrow afternoon. I suspect it might be a full house!
***
Today was a full working day for me. The two sessions on the Business Skills Toolbox seemed to go well (although I suppose I would say that. wouldn’t I?). I had a small, select group (but then I was up against three other excellent courses, including one by last night’s speaker James Moran). However, what my group lacked in numbers, they more than made up for in enthusiasm. We stuck to the time schedule (well, we were covering time management, so we had to) but also managed to deal with a wide range of questions around the subjects of increasing productivity and setting up appropriate financial records. 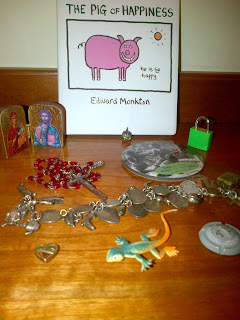 But my favourite session of the day has to be the Write Around with which we finished the afternoon. Around a dozen White Badgers (where was everyone else?) examined the assorted items I provided as a trigger for ‘Write a Life’. As you can see, it was a real cocktail – and the eight brave souls who read their pieces out for us showed great skill in concocting finished pieces of flash fiction; the beginnings of short stories; and one wonderful poem.  As always happens with this sort of exercise, there were as many interpretations and ideas as there were writers in the room. A huge thanks to all of you for making this session such fun. I hope to see you all again tomorrow evening, when someone else will be providing the trigger and I shall be on the same side of the table as the rest of you.
***
Tonight’s speaker was Syd Moore, author of The Drowning Pool and Witch Hunt.﻿ I have to admit to being what my sister calls ‘a real scaredy cat’ when it comes to anything touching on the supernatural and so two novels written as ghost stories are never going to make it on to my To Be Read list (sorry Syd!) However, she was a brilliant speaker and particularly moving when talking of her research into the dreadful stories of how so-called witches were treated in the seventeenth century.
Syd is also a great reader and the passages from her books had us all on the edge of our seats. I’m not sure whether Ian’s defibrillator was needed at the end of the session, but the effect of a flicked switch on two hundred plus writers was electrifying. And I have to admit I’m typing this in my room with the curtains tightly closed and every single lamp lit. If anyone has bad dreams tonight, we’ll know who to blame in the morning, won’t we?