Not content with giving us yesterday proverbs and moods to write from, Karin led Life Up Your Pens this morning with lists of sailing vessels (and we won’t go into whether a pedalo is a ship or not); locations and feelings. Once again, my memory was awakened; this time for early morning departures from Greek islands by ferry.  This is probably the piece I’m happiest with from this week’s exercises. It still needs polishing, but I will post it on next week’s blog (we’re back to weekly posts from next Monday).
Day six is when the specialist courses come to an end. My four sessions on the Literary Novel have been most productive, although not necessarily in the way Alexa envisaged. I have the characters, setting and beginning of a plot for what will probably be a short story, rather than a novel. I have some great tools to add to the toolbox. And I have a list of novels I can add to my To Be Read list. It was only today I realised I could have used one of my own plot ideas rather than the one triggered on day 1. Never mind, there’s always next year.
***
Today is also the day when the administration gets done. Takings are counted up in the Book Room and authors learn how many books they’ve sold. (I wonder if I’m the only one who spends the week eyeing the pile of books with my name on the cover, trying to count them from across the other side of the room without being too obvious?).
It’s also the day of the AGM. We have a new Committee, although three of the four officers are unchanged (Diana, Lesley and Margaret). Michael O’Byrne has taken over as Vice Chairman from Fiona, so look out for some criminal humour during the VP’s announcements next year. A huge thank you to everyone who stood down and hello and good luck to the newcomers.

After the official business was concluded, there was an auction of the cartoons produced by Curtis Jobling during his talk last night. There was some fierce bidding on all the items (and at one point a certain married couple appeared to be bidding against each other), but especially for the one in which Bob the Builder morphed into a Werewolf. Afterwards, the new owners were happy to display their prizes for the cameras. 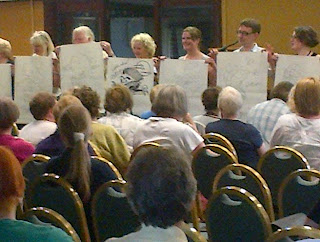 ***
And suddenly, before we knew what had happened, it was over! Six days of plotting, characterising, dramatising, teaching, learning – and above all, writing, all gone. But while the summer school is finished, the ideas generated, the prose and poetry drafted and the enthusiasm rekindled, will continue in the weeks  and months to come.
We met on the lawn before dinner for the traditional Dregs Party. There were posh frocks and the occasional DJ, cameras clicking all over the place, and promises to keep in touch. And Stella wore glitter! 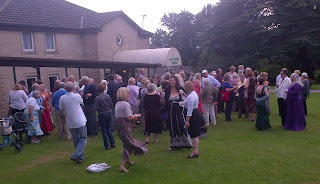 ***
Our final guest speaker was the witty and charming Deborah Moggach. She took us through the journeys of three of her books: Tulip Fever; The Best Exotic Marigold Hotel (which she told us was very different from the  film); and Heartbreak Hotel. She summed up what, for many of us, was one of the best things about Swanwick: “to be together with people who know what you’re talking about is great.” and said she wished she’d been there for the whole week.
Deborah told us that she really gets to know her characters before she starts writing their stories. She believes that while plot is important, it’s the people that matter and once you know them, they will lead the writer into the story. 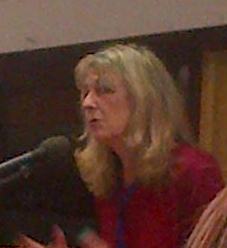 Her closing words of advice resonated with many of the writers in the room and make a good way to close: there are no rules; they are all there to be broken.
To all my Swanwick buddies: happy rule breaking, happy writing – and see you all next year!
﻿