Tuesday is traditionally the quiet, easy day at Swanwick. Half-way through the Summer School, it’s time to take a breath and look around; maybe go on a half-day visit to a local place of interest (Chatsworth House, Bletchley Park etc); or spend the afternoon dozing (sorry, I mean writing) on the lawn or in our rooms.

For many members, today was still like that – but not for the hardy souls signed up for Alexa’s Procrastination-Free Day. From 10am to 4pm today, we switched off our mobiles and our internet connections (well most of us did) and wrote in 15 – 30 minute blocks, with breathing spaces in between. We set our goals at the start of the day (some quantitative; some qualitative) and kept score as we went along. Everyone declared the day a success and several of us exceeded our targets. Alexa was a brilliant facilitator (even if I did think at one point that she was threatening to lock us in the room during lunchtime). 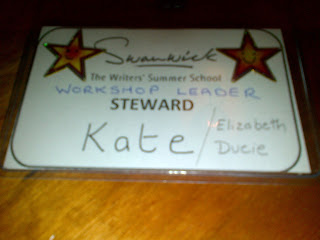 And the inner child? Well she was delighted to get one star for reaching her day’s word total by lunchtime and a second one for passing all her milestones by the end of the day. And she’s going to wear them with pride until the end of the week! This was probably the best day I’ve ever spent at Swanwick, bar none. Can we do it again next year please?
***
Back on Saturday, I said I would take a stroll around the (to me) newly-discovered Lake at some point. Well so far, I’ve not put my nose outside the door, except to hurry from the main buildings to the accommodation blocks and back again. But this afternoon, after such a productive workshop, I finally made it. The sun was shining, there was no breeze and the reflections in the water were stunning. 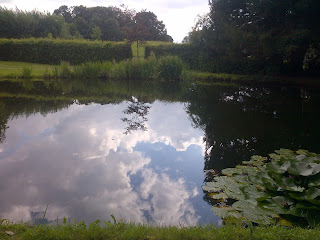 ***
For the larks among us, there are a number of activities running each morning before breakfast. There’s ‘Lift Up Your Hearts’ in the Chapel; Meditation down by the lake; or my choice for this year, ‘Lift Up Your Pens’. At yesterday’s session, Julia gave us Cadbury’s chocolate to eat (all in the cause of writing, of course). Today there were no physical treats,  but Tarja’s exercise to examine our unwritten and largely self-imposed ‘writing rules’ and then to give ourselves permission to ditch, amend or rewrite them in a more helpful way was a gift to this scientist who spends much of her life working ‘by the book’. One rule I discovered was “Only write in the morning; do not ever attempt to write in the afternoon”. Well, I’ve proved that one can go, haven’t I?
***
Tonight’s guest speaker was Zoe Lambert, author of The War Tour,  an anthology of transcultural short stories centring, as the title suggests, on wars. She made some interesting points about the ethics of writing ‘other people’s stories’ and feels that on balance it is better to write, well and sensitively, rather than not write at all, since in the ensuing silence, some important stories might never be told. She also talked about the difference between writing from a victim’s point of view versus trying to get inside the mind of the oppressor. She finished with a great quote from Chekhov: let the jury judge them; it’s my job simply to show what sort of people they are. ﻿