There’s been a lot of questions, not to say interrogations, one way and another today – more of which later.
But first, let’s pop back into Day 2 for a moment, to acknowledge what is rapidly becoming yet another Swanwick tradition: Buskers’ Night. Too late to make it into yesterday’s instalment, the third annual BN was only for night owls, starting as it did after 11pm and not finishing until half past midnight. (OK, I know that’s an early night for some hardened Swanwickers, but if you’re a lark pretending to be an owl, it’s really late!).
The audience was treated to a great mix of music, from Connie Francis to The Stranglers, by way of a lament by the wife of a trumpet-playing folk singer and a beautiful guitar duet from a 1950s French film. But for me, the star turns of the show were John and Zana, Swanwick’s answer to The Proclaimers, with the appropriately-named ‘500 Words’, followed by John’s solo performance of ‘Patricia the Stripper’. Many thanks to Mark and the Gang for putting it all together. 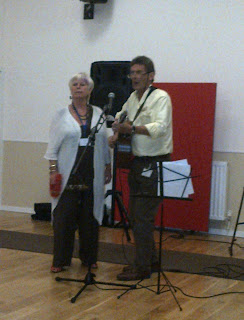 ***
This afternoon  saw the first ever Swanwick Tweet-Up, followed by Twitter101 which, as I predicted yesterday, attracted a large crowd. There were quite a few novices, who took the opportunity to grill the more experienced Tweeps on everything from how to sign up; what exactly is a hash tag; and how to block an unwanted follower. The session became quite interactive, with occasional side-meetings to deal with immediate issues (usually with phones) and although it’s probably fair to say that not everyone’s questions were answered, there are now more Swanwickers on Twitter than there were at the start of the week. Whether they all know why – or what to do next, is another question.
And if anyone hears a rumour that I’ve been blocked from Twitter for spamming, it’s just the accidental consequence of a demonstration that went slightly astray.
***
Another full house today heard Meg Davis give an agent’s view of ‘Editing Your Manuscript’.  I’m sure I wasn’t the only person in the room to realise that maybe I’m not quite as far down the road as I thought I was – but certainly left with lots of hints on the next step in the journey. Meg also showed that she has a great (if slightly child-centred) taste in movies.
***
Tonight’s speaker was a Swanwick regular, Michael O’Byrne, a former Chief Constable whose anecdotes on ‘thirty odd years of policing’ had us roaring with laughter, while the crime writers among us heard some home truths. We learnt that writers deal with bodies very badly in general; policemen do not throw up at the sight of a dead body, whatever its state; and that the best way to recreate the smell of a corpse (should one wish to do so in the interest of research and authenticity) involves fish, plastic bags and sunshine. Frankly, I’m glad I’m not a crime writer.
﻿