The End of an Era

I’ve just finished reading A Memory of Light by Robert Jordan and Brandon Sanderson. “OK, you might think, so you’ve read a book; big deal. Many people are readers; we’re all reading books — and finishing them — every day of the week,” and that’s a fair point. So let me start again.
I’ve just finished reading the fourteenth book in The Wheel of Time fantasy series. The series runs to more than four million words and nearly twelve thousand pages. [For comparison, Tolkien’s Lord of the Rings trilogy comes in at just over a thousand pages, while J K Rowling managed something over four thousand pages about a certain boy wizard.] 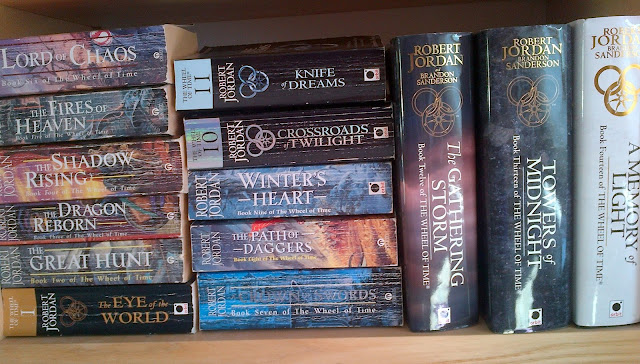 Now I know quality is more important than quantity [and you can find out what I thought about the final book by reading my review here] but as I faced my first Jordan-free weekend in a long time, I’ve been reflecting on this journey that’s taken me the best part of twenty years, through employment to self-employment, a change of career, a serious illness and a major house-move.
I don’t remember who first introduced me to Robert Jordan, although I suspect it might have been one of my sisters or a close friend, all of whom read a lot of fantasy. I don’t even remember when I started reading them, although it must have been after 1990, when the first book, The Eye of the World was published. At the time, it was supposed to be a series of six or eight and I guess I was reading them at the rate of one book a year.
I do however have vivid memories of reading the eighth book The Path of Daggers in 2000. I was working in Ukraine and while invigilating an exam one day, I flicked through the  remaining few chapters thinking “he’s going to have to go some if he’s going to bring all the loose ends together by the end.” It was soon afterwards that someone pointed me in the direction of book nine and reports that Jordan was thinking in terms of twelve volumes in total!
For some reason, I didn’t get past book nine that time around. I think it might have been the disappointment over a promised ending not materialising!
Fast forward to 2010, when my husband bought book 13 for me for Christmas. By this time, Robert Jordan had died and his notes for the last volume were being converted into a final trilogy by Brandon Sanderson.
Looking at my bookshelves, I realised I didn’t have books 10-12, which meant I hadn’t read them yet. I also realised that although I still knew the main characters’ names and a vague outline of the story, and although I knew it was one of the most exciting series of books I’d ever read, I couldn’t remember the details of  the storylines that, to me, were only half-way developed.
So I went back to the beginning!
I read the first three or four books straight after each other, which was a bit of a mistake, as the reiteration of stories I’d just finished, at the start of the next book, became irritating. Then I started the final year of my MA and had lists of books I had to read for each module. The Jordan volumes became my holiday reading, my ‘guilty pleasure’ and that made the rereading easier.
By the time I finished the MA, I had reached book eleven and was starting to motor. By book twelve, I had switched from the paperback to the hardback versions: heavier and thus harder to read in bed, but the larger print is much easier on the eyes!
Then suddenly I was on book fourteen — and within two weeks it was all over!
Am I glad I did it? Yes, I think so. Certainly, I’ve enjoyed all the books and spending time with Rand, Egwene, Perrin and Mat, plus Lan and the wonderful Nynaeve; although with hindsight, it would have been better to have kept reading the new books as each one appeared and not having to reread the first nine.
Would I recommend the series to other lovers of fantasy?  Absolutely; although I would suggest interspersing other books and other authors along the way.
Last week, I wrote about writing challenges. This week is definitely about a reading challenge. Next I might tackle Charles Dickens, who I believe also wrote over four million words in total. But first, I’m going to read some short stand-alone books — or even better, some books of short stories!
What about you? What’s the biggest reading challenge you’ve ever tackled — and how did you get on with it?