The Generation Game by Sophie Duffy

[From this month, I’m introducing a book review into the monthly blog mix. From March, they will be new reviews, but I’m starting with one I posted elsewhere a few months ago; I loved this book and gave it a 5* rating.] 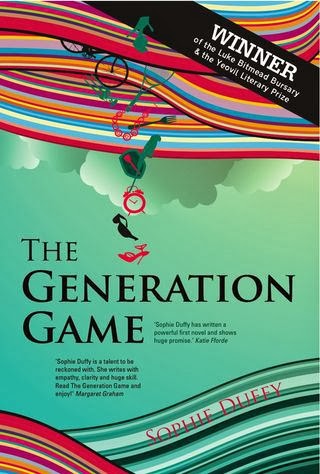 At the start of The Generation Game, it is 2006 and the central character Philippa has just given birth to her first child. We do not know whether Philippa is married, who the baby’s father is or whether they are still together. We do know, gradually, that the baby is unwell and as Philippa waits to find out whether her child will survive, she tells her own story in flashbacks.
We hear of her birth in a London hospital, to Helena, an unmarried mother who tries her best but is overwhelmed by having to take responsibility for another’s life. We see Helena flee with Philippa to Torquay and later, alone, to Canada. Philippa grows up with a variety of friends, some of whom she loses forever while some she loses and then finds again. There is Bob, who becomes her de facto guardian after Helena leaves. There is Lucas, the little boy who is her best friend even when he is no longer with her. There is the wonderful Wink, with her parrot, her front room that stinks of bird pee, and her addiction to Bruce Forsyth and the eponymous game show which was a part of so many people’s Saturday evenings. And there is Terry or TJ as he prefers to be called, who is always around in the background – and sometimes in the foreground as well.
I loved this book from the first page to the final word. Starting back in1965, it will strike a chord with readers who remember the sort of childhood that was common in the 1950s and 1960s: children present and observing but not fully understanding the goings-on of the adult world. There are some great cultural references: taking Blue Nun to dinner parties in the early 1970s; street parties for the Queen’s silver jubilee; that kiss on the balcony of Buckingham Palace when Charles married Diana. Each of the flashback chapters is headed with the name of a television programme from the era: This is Your Life; New Faces; Gladiators and so on. While these do not necessarily relate to the content of the chapter, they are additional links back to the period in question.
The Generation Game won Sophie Duffy both the Luke Bitmead Bursary and the Yeovil Literary Prize. It’s not difficult to understand why.
[In addition to the monthly posting, you can read more of my book reviews on Elizabeth’s Book Reviews .]