A Memory of Light by Robert Jordan and Brandon Sanderson

[It’s the first Monday of the month, which is book review day. I’m in the throes of Chudfest this week, with barely a minute at the keyboard, so here’s one from the archives.] 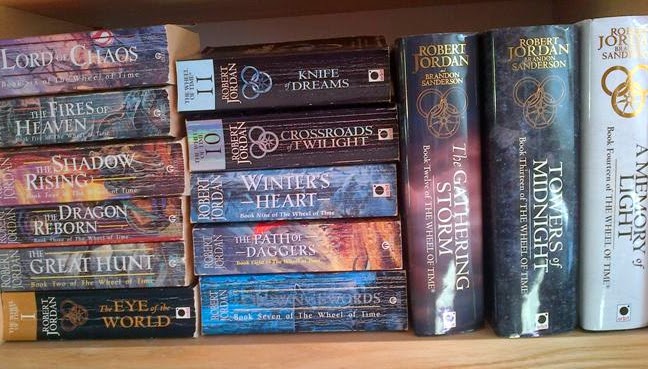 This is the fourteenth and final book in The Wheel of Time series of fantasy novels and it didn’t disappoint in any way. I’m not going to include any spoilers — that wouldn’t be fair on anyone who’s read the previous thirteen books and, like me, has been enmeshed in the story and Robert Jordan’s world since day 1.
However, I will say it is a wonderfully satisfying book that brings all the outstanding story lines to a conclusion; even some of the stories that seemed to finish in book thirteen or earlier have a final episode here. There were some really shocking moments when I found myself gasping out loud and points where tears threatened, but strangely, I found myself smiling quite a lot of the time as well.
I also found myself ‘watching’ many of the scenes in my head, as they are very visual. There has been talk over the years of adaptation either as a TV miniseries or as film(s). Given that the series runs to more than 4 million words on nearly 12,000 pages and includes literally hundreds of named, and described, characters, I don’t see how any adaptation would work without losing huge amounts of detail.
Jordan’s world draws on many myths and legends. Inevitably, there are some points that will seem derivative, especially to anyone who grew up with Alan Garner and JRR Tolkien. For example, I was never able to read about Loial the Ogier without visualising Tolkien’s Treebeard and the Ents destroying Isengard. But there are some wonderfully inventive aspects to Jordan’s world. I especially loved the Aelfinn and Eelfinn with their tricksy, manipulative ways and the dice rolling in Mat’s head.
In my opinion, Brandon Sanderson writes with a slightly more fluent tone than Robert Jordan did (and I read this final volume in less than two weeks, whereas some of the earlier ones have taken me months to get through). Working with Jordan’s vision, characters and story lines, Sanderson has woven a great final episode to a highly complex fantasy series.
A final comment to new readers of Robert Jordan: In some series of books, each volume can be read as a stand-alone. I don’t believe that is possible here. Go back to book 1 and start from there. It will take a long time, but it will be worth it when you read the closing words of book fourteen: There are no endings, and never will be endings, to the running of the Wheel of Time, But it was an ending.