This week we return to my latest series of meanders through the past seven decades. In Movie Moments, we’re looking at what was topping the charts at the box office, some of the biggest names around, and which films mean the most to me when I look back in time. And there will even be a spot of music each time to bring back memories. Last month, we began in the 1950s and today we jump forward to the 1960s.

We weren’t one of those families that spent every Saturday morning at the picture house watching the westerns and cartoons. I don’t remember there being many films on television, and there were certainly no DVDs or box sets. So seeing a film in those days was still a rare occurrence for me. And to be honest, when I look through the list of the top movies for the decade, it’s difficult to remember whether so many of them are familiar because I saw them when they first came out or because I’ve caught one of the interminable reruns in later years. 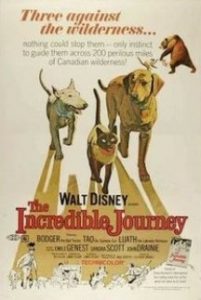 My mother took me to see The Incredible Journey in 1963; and I’ve never forgotten that heartwarming story of a Bull Terrier, a Labrador and a Siamese cat who trek hundreds of miles across America to be reunited with their owners. I can remember seeing The Sound of Music when it came out in 1965; my best friend took me to see it as a birthday present. And I vaguely remember being taken to see a scary film by a visiting cousin and her boyfriend. It might have been Patrick McGooghan as Dr Syn, The Scarecrow. But I’m not sure; I was so scared I blanked most of it out.

The popular movie genres in the 1960s included musicals, horror, and Disney cartoons. The Hays Code, a set of industry moral guidelines which had been in place since the 1930s, was abolished in 1968 and more experimental and risque productions started to appear as a result. 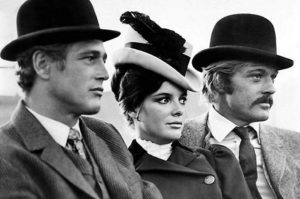 Paul Newman and Robert Redford seemed to be everywhere in the 1960s and in 1969, as a teenager on my first ever holiday on my own in Ireland, my cousin Brian took me to see Butch Cassidy and the Sundance Kid. Afterwards we sat in a pub listening to an impromptu jamming session and put the world to rights, covering everything from films and music to the Irish political situation. And at the time, it seemed such a grown-up thing to do. I think back to that day every time I see a picture of Paul Newman and Katherine Ross on a bicycle or hear B J Thomas sing Raindrops Keep Falling On My Head. Cousin Brian is no longer with us, so this memory’s for him.