Peace is Not at Home

[For the past 20 years, I have been lucky enough to visit Russia many times and my experiences and impressions colour much of my writing. This piece was written after a visit to Yekaterinburg.] 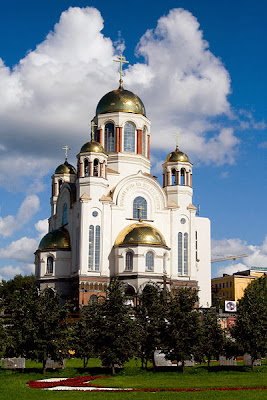 Screams rise from the earth and walls bleed pain; memories of children dying for their parents’ deeds.
She pauses with her hand on the door, wondering if she should leave, but all is silent now and her feet draw her onwards, inwards. She had come here to think, maybe to find peace.  Away from the streets with its souvenir stalls and milling crowds.  Too early for guided tours, too late for the morning service, she is temporarily alone.
Unlike other Orthodox churches — dark, with smoke-blackened wood, ancient icons, incense and melodic voices — this is built in honey-coloured stone and seems warm, without the draughts she has come to expect.  Sunlight through the windows in the cupola illuminates the murals and mosaics, colours bursting from the walls.  The altar screen is delicately carved.  There is no singing; just a reverential hush.
This should be a haven of peace and tranquillity.    People come in groups to share the joy of weddings and christenings, the solemnity of a funeral.  They come alone to pray or meditate; no-one bothers them as they stand in contemplation.
But she shivers as the echo of horror and violence bathes her once more in waves of frigid air.  This ‘Church on the Blood’ was once the Ipatiev House where five children were shot and bayoneted in atonement for their parents’ excesses. A family born to privilege and power, surrounded by controversy and finally overtaken by history.  Their bodies, burnt with acid and thrown into a pit in the forest, had lain unknown for more than half a century. They are now the object of pilgrimage for thousands.
As she crosses the open space below the huge dome, she hears their shades calling to her once more.  In a small alcove behind the altar, a photograph of the Romanov family sits on a pillar at the epicentre of the terror. She sees and smells the blood, feels the fear, hears the screams.  Whatever else she might find here, peace is not at home.
She heads for the doorway and fresh air, passing other early morning visitors.  She wonders how they can be so calm and at peace.  Don’t they hear the echoes of the past?