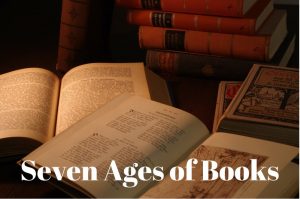 Last month, in the first part of this series, we went all the way back to my first decade and looked at the books and authors that influenced my very early years. This month, we are moving forward into my teens, when I first discovered fantasy, a genre that is still one of my favourites today.

I first came across Alan Garner’s debut novel, The Weirdstone of Brisingamen, not as a book, but as a serial on the Home Service (the forerunner of BBC Radio 4) in 1963 and it had such an effect on me that even now, more than fifty years later, I still feel the urge to hide if I see a flock of crows flying in my direction – and on the one occasion I travelled to Alderley Edge for a meeting, I could hardly concentrate on the proceedings inside for staring out of the window at the scenery and noisy bird life.

In a retelling of the old legend of a sleeping army awaiting a call to save the country from danger, two children, Colin and Susan, face evil witches, flying spies (hence the crows!) and sinister localised fog, as they try to prevent the eponymous jewel falling into the wrong hands. 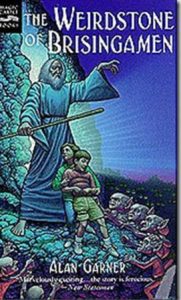 This is the first part of a trilogy which took Garner more than fifty years to complete (and I have to confess I’ve not yet got around to reading the third part). It’s considered a children’s book, although not written as such. I read it as a child and return to it periodically as an adult. And whenever I pick up my copy, I am taken straight back to that little house in Birmingham; sitting around the radio trembling at the cawing crows.

This is the book that taught me the power of imagination. Reading and being read to (and that’s all a radio drama is after all) enable us to put our own interpretation on stories and characters in a way that film and television tend to stifle.