In the first part of this series, we went all the way back to my first decade and looked at the books and authors that influenced my very early years. In the second part, we moved forward into my teens, when I first discovered fantasy, a genre that is still one of my favourites today. Now we travel forward once again, onto my twenties.

The 1970s was the decade in which I got married and set up my first home. We lived in a rented bungalow in Essex and were stony broke. Definitely no money for books. But there was a library just up the road and we trawled through the shelves every week. One of the genre we got into around that time was science fiction.

There were a lot of sci-fi books around, some better than others. And, apart from the wonderful Hitchhiker’s Guide to the Galaxy, many of the stories were very similar. Man exploring space; coming across an alien life form and being quick to blast it out of existence rather than try to understand a new culture. I blame Star Trek myself.

We read so much we lost track of which books we’d already borrowed, and started using a code to remind ourselves. So anyone using Benfleet Library, assuming it’s still there, who finds a faint pencil mark on the back page: sorry, it’s my fault. 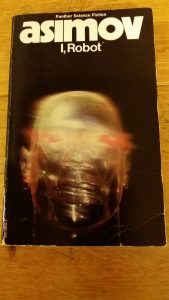 The book I think of as THE sci-fi book is I, Robot by Isaac Asimov. Described as an ‘unforgettable, spine-chilling vision of the future, where Earth is ruled by master-machines…and when robots are more human than mankind’, the action takes place in 2058, which seemed so far into the future back in the 1970s, but is now just forty years away. Much of the science is more fact than fiction these days too. The book introduced three laws of robotics, paraphrased as:

These seem eminently sensible rules, but inevitably, things go wrong, and there are always ways around laws, even when they seem water-tight. Which is probably why we tie ourselves up in knots these days, trying to draft clearly understood laws that cover all eventualities.

And why, in the year when a computer has recently attempted to write a new Harry Potter story, some people shudder at the thought of robots taking control of our lives. Although, having seen an extract from Harry Potter and the Portrait of What Looked Like a Large Pile of Ash, I suspect there will be a role for human authors for a while yet!