#Swanwick70: Shirley’s In The Book Room

We had another superb speaker last night in Simon Nelson from BBC Writersroom. I will never look at Harry Potter and Star Wars in the same way again; nor The Archers for that matter. And although his talk was focused on script-writing, everything he said could be applied just as easily to novels or short stories. Then we finished the day with a General Knowledge Quiz. Now, I’m not one to brag, so all I’m going to say is The Jackals rule, okay!

Today’s the last day the Book Room is open; so the last chance for all you lovely Swanwickers to purchase books by your friends, your tutors or by authors you are meeting/hearing about for the first time. So let me introduce you to today’s guest, Shirley Anne Cook, who writes both poetry and stories for children. 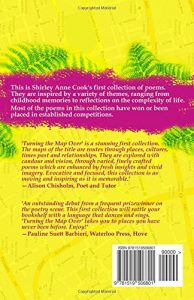 Turning the Map Over is Shirley’s first adult poetry collection. As implied by the title, various themes are covered. A number of the poems have won or been placed in competitions such as Mslexia and The Plough. Shirley has won the Swanwick Poetry Competition three times.

Ancient Egyptian Rhyme Time is Shirley’s first poetry collection for children between the ages 7-11. It contains poems in a variety of forms, from classical ballads to free verse, haiku and raps.

Shirley lived in Egypt for a while and its history and monuments have inspired both this poetry collection and three books for children: The Snake Princess, The Treasure of the Urn and The Diary of Teti-Tuti aged Twelve-and-a-Half Summers – published under the pseudonym Shirley Harber.

Shirley is a teacher and lives in Buckinghamshire.