Valentine’s Day in Modena: a thank you letter

I was brought up to be polite; I write thank you letters (as you can see); I always remember to smile and say please; I rarely ignore social rules willfully. So I was a bit disconcerted to discover on our drive back from Heathrow last week I’d been breaking one of the latest rules in restaurant etiquette: I took photos of my food (although I didn’t ping them out into the ether — until now). But I don’t care — and frankly, I doubt if the irrepressible and creative chef Massimo Bottura would care either. In fact, I think he would welcome me sharing his designs with the world — so here goes. 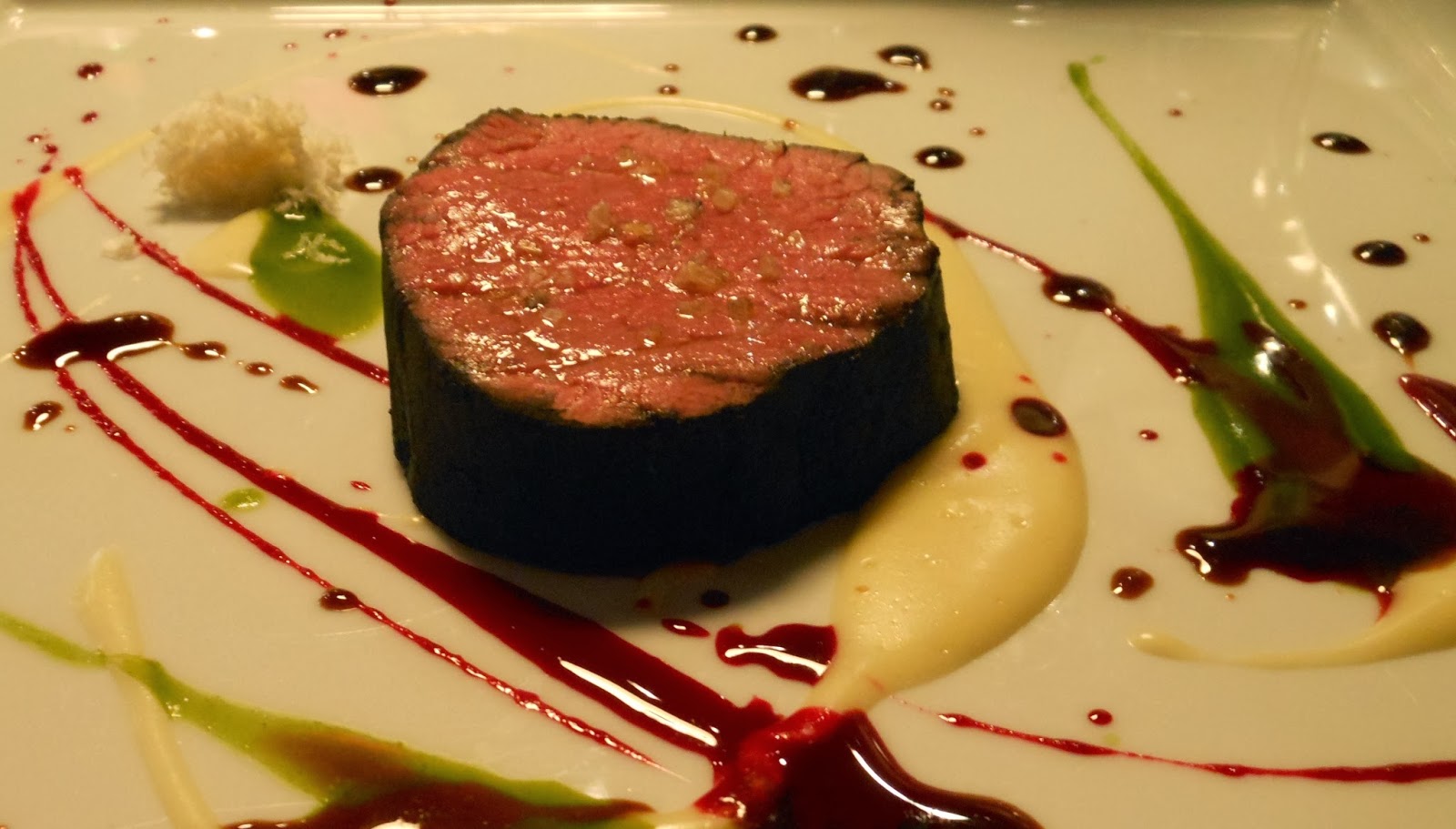 We first saw Osteria Francescana featured on the final of Masterchef — The Professionals; my husband suggested it would be a good place for Valentine’s Day — and it would have been churlish to argue, so I didn’t. These days, our holidays tend much more to the long weekend than the fortnight in the sun — and when we lived in Kent, we have been known to pop over to France for lunch. However, even for us, a day-trip from Devon to Northern Italy seemed excessive, not to mention impossible with the transport links from the South West in the parlous state they were at the time. We flew into Bologna, took the bus to Modena (€15 Euros, 45 minutes) and then walked into the city to find our accommodation. Isn’t it amazing how much more energy one has at the start of a holiday? When we returned to Bologna four days later, we took a taxi door to door.
Arriving at Quarto Piano, the delightful B&B run by Antonio and Alessandro, I discovered my Italian was not as good as I thought. Expecting to find a whole building containing multiple musical instruments, we were surprised to be directed instead to the fourth floor of an apartment block! Luckily there was a tiny elevator (for a few seconds, we had flashbacks to our visits to Kiev, where our apartment was on the fifth floor — those suitcase-carrying climbs were so hard). There was however a musical connection as well; the building used to be owned by Modena’s famous son, Luciano Pavarotti. We had a beautifully, if idiosyncratically, decorated room in the eaves and there was a tiny lounge for relaxing after a hard day’s eating.
Osteria Francescanais located in a narrow back-street in the semi-pedestrianised part of the city. Massimo was chatting to two friends outside and greeted us expansively before knocking on the huge wooden door and ushering us in. With only twelve tables in total, split across two separate dining rooms, there seemed at times to be more waiters than diners. They appeared stern and formal initially, but this was probably because they were concentrating on understanding their customers’ requests — none of which was delivered in Italian. Two or three times during service, Massimo came out and visited each table, chatting to diners and ensuring we were all happy (and we were so happy!)
We chose the Sensations Tasting Menu, which promised seasonal dishes from the restaurant’s experimental kitchen. And that was all the information we were given on the menu! It was a fascinating experience, not knowing in advance what would be presented next; trying to guess from the cutlery — and usually getting it wrong. Some dishes worked better than others: I loved the crunchy part of lasagna, a deconstructed dish with crispy pasta garnish, the shrimp ravioli and the frogs’ legs, but was not so sure about the abstract of a winter salad  which turned out to be a sort of rice pudding and ham dish (which seems to have lost something in the translation). The beef plate shown above, fillet cooked sous vide, is a tribute to Jackson Pollock and in a world where most Michelin-starred chefs pride themselves of every plate being identical, I can confirm that the accompanying sauces (horseradish, beetroot and basil) were indeed thrown randomly on the plate so that each was an individual work of art.

If I have one niggle, it’s that Osteria Francescana doesn’t do desserts as well as some other restaurants we’ve eaten in, but the pancakes, stuffed with apple and foie gras, were superb. And if we wanted something sweeter, there was a three-day chocolate exhibition taking place in Modena’s main square (although it was more than 24 hours before we could find room to try any of the wares on sale there).
Modena is a quiet little city and in February there isn’t a lot to see or do.  But other lasting memories of the weekend include visiting Parma and seeing crowds weeping over the body of 19th century saint Don Bosco, who is currently ‘on tour’; attending sung Mass in Modena cathedral and realising that fifty years after we started using the vernacular, I can still remember the words of the Creed in Latin (maybe I was concentrating at school after all); wandering around the food market and wondering why we don’t get fruit and vegetables like that at home; and of course, that chocolate festival. 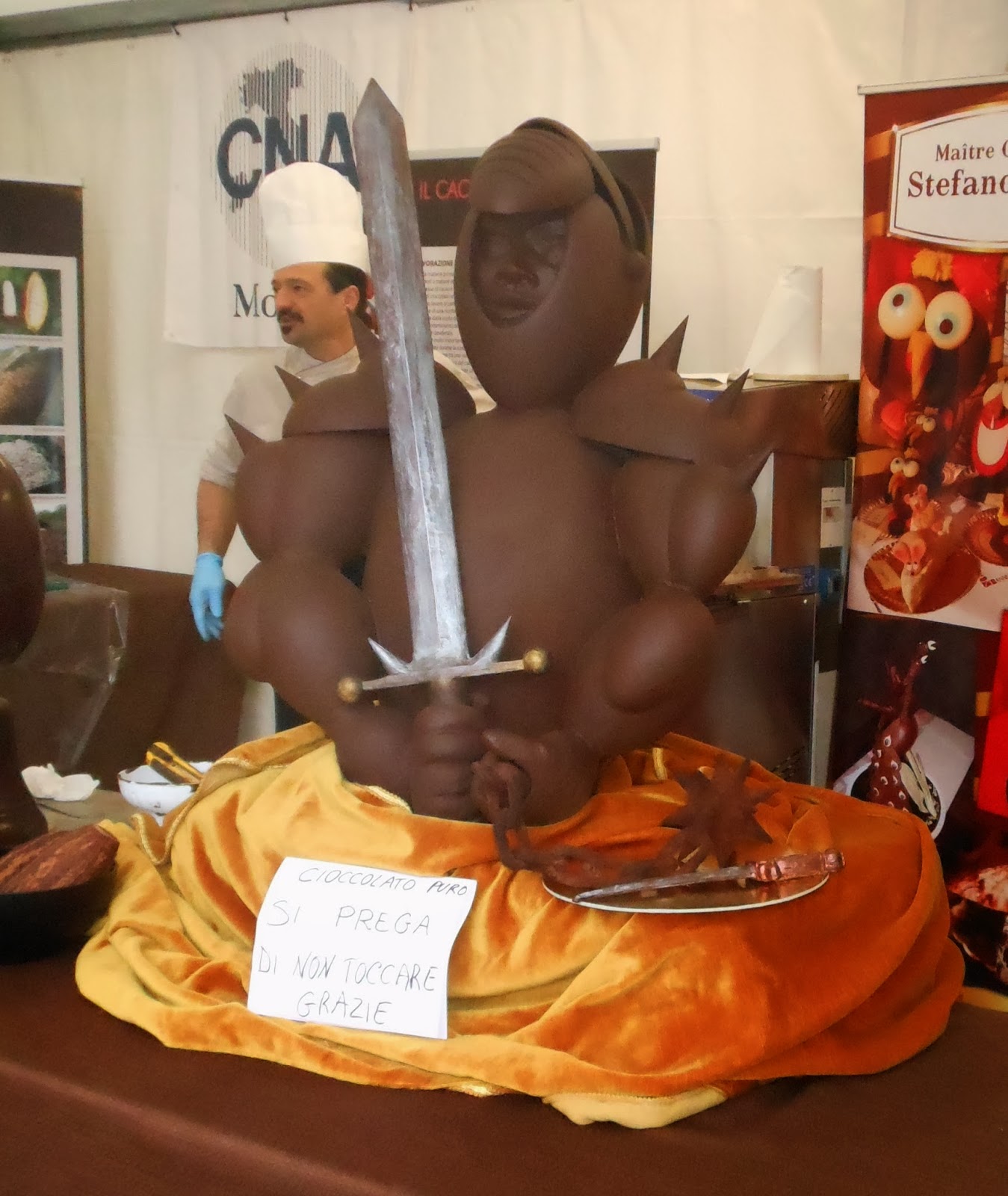 Thanks for a brilliant weekend go to: Massimo Bottura and the team at Osteria Francescana; to Antonio and Alessandro at QuartoPiano; but most of all to my wonderful husband for making Valentine’s Day 2014 so very special.